After having my FN2 almost 3 years it now makes a noise that seems to be created by the Auxiliary belt.
When I spray a little bit of water on the Auxiliary belt the noise disappears.
If I should believe 'scotty Kilmer' from youtube it tells me that the belt needs to be replaced.

My car is close to the 100k km so it must the be age of the belt I expect.
The battery connectors (still) measure about 12V when running idle.
Expected to measure a voltage close to 14V while running idle. And at 12V I would not expect it is in 'standby mode' or something to save on gas.

Currently my plan is to replace the Auxiliary belt first to see if this already resolves the entire issue I'm having.
Just to make sure I would not replace the alternator if it is just fine.

I'm posting this not only because I'm interested in getting my question possibly answered but also because I would like to share my information to help others with what I have learned. Hopefully also share the end results if it was all successfully resolved.

My question is if someone else might have experienced this (same) issue and could possibly already tell that:
option 1 : only replacing the belt already will do the job or
option 2: that it would only be solved by replacing the alternator.
Since I would not have expected that the alternator would break that 'soon'.
But this would be my second Honda civic that would have a broken alternator if that is the case .

Joined Oct 14, 2018
·
555 Posts
Have a look at at the pulleys when you take the belt off.
The top pulley and tensioner pulley bearings can be a problem, if it spins too loosely or has too much movement side to side then change it.
The crank pulley can also degrade and go out of balance.
The noise may be from the alternator.

Joined Sep 23, 2020
·
17 Posts
Thanks for the reply pjacksat55.
My guess is that it is the alternator because of the voltage, therefore also did order it.
I have not been able to see something in the pully's behaviour so far but I will take another good look before taking the belt of.

But if the tensioner pully is worn... Could I only change this part: 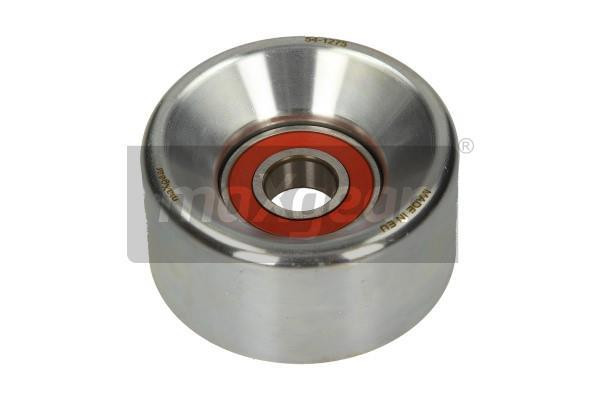 What part would you recommend (brand-model) to buy if it is the tensioner pulley?

Joined Sep 23, 2020
·
17 Posts
Something I forgot to mention:
It is a week ago since I have driven the car.
But I could only hear the noise very clearly inside the car when the car was running idle.
Not sure if the engine noise would mask it or if it just isn't there when the belt spins faster.

Joined Oct 14, 2018
·
555 Posts
The pulleys can be bought separately, try Japserviceparts.co.uk, you have to remove the pulley from the tensioner to get it off anyway (watch the nut at the back as it's just in a slot).
If the pulleys aren't in a terrible state, they might just be a bit dry, you can repack them with some good black moly grease (driveshaft stuff) just use a small slot screwdriver to remove the plastic bearing holder.

Joined Oct 14, 2018
·
555 Posts
Have you checked the battery, if it's down a cell it will be putting extra load on the alternator.

Joined Sep 23, 2020
·
17 Posts
I have tested the battery a few months ago with a Midtronics Battery tester and it was fine at the time.
Will try to borrow a battery tester again this week.

If the car is not running the voltage is ~12V so would not expect a broken cell.
Just in case I have another battery I can install that is fully charged and measuring 12.6V when not connected.
H

It should be charging at at least 13v regardless of load, as any lower the battery won't be charging.

The belt wouldn't cause the issue unless it was slipping, and then it's probably be making a squeeling sound

Joined Sep 23, 2020
·
17 Posts
Thanks for your reply Hipwell.
I was thinking that maybe the belt might cause that the alternator isn't working properly.
This is also something that is mentioned in the video Gates put on youtube: But then again I would not expect that the voltage would be a looking stable on a simple multimeter.

Expect to have the 14mm plug tomorrow to allow me to remove the belt so that I might be able to determine if the tensioner or tensioner pully is (also) bad.
Hopefully not.. fingers crossed because those seem to be a lot more expensive then they were a few years back.

What other brands are fine, are there any ?
Since I expect I will be able to get non-genuine parts a lot faster and cheaper.
I have seen aftermarked parts that are also a lot more expensive that are focused on racing for example.
So I expect there must be brands that are as good or maybe better for less ?

Joined Oct 14, 2018
·
555 Posts
I would use genuine parts, the pulleys are not daft prices, problem with the tensioner pulley honda want to sell you the whole tensioner but they can be bought separately and you can get the bearings if you have the tools to remove them.

Joined Sep 23, 2020
·
17 Posts
Replaced the Auxiliary belt and after that the voltage measured was 14V.
At first thought 'well the alternator must still be ok then'.
Then I did drive around for about 20 minutes to charge my battery and just to check if I would notice something else.
When the engine was having a neutral driving temparature I did also make sure that it enabled v-tec.

When returning back home, the battery symbol appeared on my dashboard while parking my car.
Measured the voltage while the engine was still running idle.
The voltage was ~11.6V while no loads (AC, radio, headlights) where enabled.
So this wasn't looking great anymore.

Expect that the alternator might just have worked for the first few minutes due to the fact that I moved it a little bit with my hands or something.
The tensioner was fine, the idler pully and the tensioner pully also looked ok to me. The belt also runs without moving around on some of the pully's.

I will be getting a battery tester tonight to allow me do do a 'system test' tonight or tomorrow morning with another battery installed if that is necessary.
H

Even at idle it should be charging more than 11.6v

pjacksat55 said:
Has the noise disappeared
Click to expand...

There was still a little not noise but not like before.

Did just perform a battery test. It mentions that the battery is good but needs charging.
H

The battery will be flat becuase the alternator isn't charging it properly.

It's easy enough to do, I did one on my mates fn2 last year, slam panel off, it was tight, I ended up taking the radiator out to get it out because his bumper was bonded on, but even still it probably only took me a couple of hours tops.

Joined Oct 14, 2018
·
555 Posts
If you can, check what voltage is coming directly out of the alternator, you got 14v then later nothing as the car was running directly off the battery. It'll tell you whether the alternator is gone or if it's a bad earth.

Joined Sep 23, 2020
·
17 Posts
I will test the voltage directly on the alternator tomorrow of that is possible. I started to investigate how to remove the front parts because I will never get the alternator in/out otherwise.

Will post an update tomorrow.
Thanks for the feedback today!
H

Joined Jun 21, 2019
·
246 Posts
Slam panel is only a few bolts, there's about 3 holding the alternator on, and the belt needs the tension taking off.

It's a bit of a squeeze, radiator out gave loads more room

Joined Oct 14, 2018
·
555 Posts
Hipwell is bang on, taking the bolts out of the headlight and moving it forwards gives you a bit more room as well.

So the tensioner must also be removed. I can't get the idlers pully bracket off. The bolts are stuck it seems.
1 - 20 of 32 Posts
Join the discussion
Continue with Facebook
Continue with Google
or sign up with email
About this Discussion
31 Replies
4 Participants
Last post:
Hipwell Nov 6, 2020
2006+ Honda Civic Forum
A forum community dedicated to all Honda Civic owners and enthusiasts. Come join the discussion about performance, modifications, engine swaps, troubleshooting, wikis, VTEC, and more!
Full Forum Listing
Explore Our Forums
General Discussion (8G) Greece 8G Type-R Engines and Transmission (8G) Introduce yourself
Recommended Communities