Had my FN2 for over a year now, the car was completely standard when I got her but I've slowly been modifying her! I've called her Lashonda because of her ghetto booty!

Her she is when I first got her: in standard form:

I obtained an official Mugen throttle body off of Civinfo and though I would try it along side the du-luck panel filter I was running, but it wasn't for me.

I sold that an moved on to tyres. I decided that I wanted some good rubber to stick to the road so I ordered myself some parada spec 2 wheels all round. the tyres that came with the car were getting bald and chunks out of the sidewalls so I thought it would be safer!

The car came with EP3 type r alloys, so I decided to get some snow tyres and stick these on as winter wheels! Great decision as I had to go work up in Wick and down to Manchester these helped nicely in the snowy weather.

That was pretty much it for winter. My next move was to get my FN2 alloys refurbished for spring. The previous owner had eaten a lot of curb so I felt it was necessary. I went for gloss black as I wanted to start a red and black theme going on the car.

I then decided to get a second hand milltek non-res. It was literally on the car for 1 day before I got it removed. I really didn't like how loud it was, I will be looking for an HKS in the future though as I heard they sound great.

I was working down in Burnley for a project and was due to go to Angola soon after so I decided it was prime time to get my car lowered 15mm at ABP and get the stage 2 FRS.

This totally improved the handling of the car! The customer service at ABP was top notch.

Next I bought a typeRkits replica grill as my standard grill was damaged because the previous owner drilled holes in it to fit a fake type r badge. I painted it night hawk black and fitted it but it just wasn't for me. I liked the way the car looked standard so I decided to sell it and buy new grill mesh.

I then got a Pipercross Induction kit with heat shield. I love the sound it makes on V-tec, its just so deep! A few months later I got a crazy scoopin and fitted that with the help of some friends. This makes the car sound even louder on V-tec especially in these winter months!! =D

During the summer I gave the milltek exhaust to my friend as a trade to paint all the scratches on my side skirts and bumpers and also do a full detail. It was swirl central on the car!!

I've fitted some mtec brakes all round on the car. Can't say they are much different from stock. The might possibly be worse so I think I'll go for something better in the future. 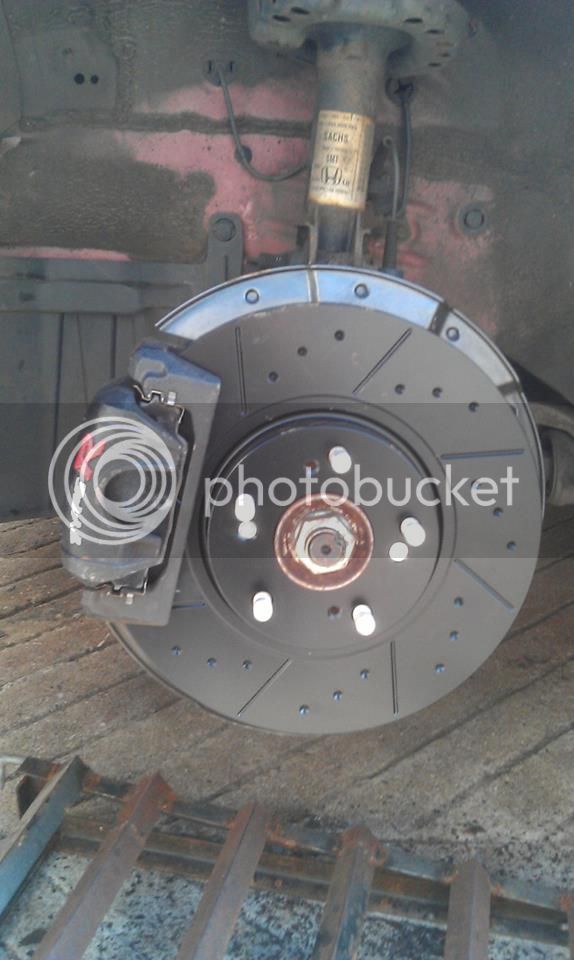 I bought some new scoops to replace my fog light's when I was in Angola. These are genuine Mugen scoops. I bought them (second hand) to make the car look a bit meaner, nothing else really. I will be fitting these very soon.

Lastly I decided to take the car for a dyno run. Sometimes the car felt very slow and other times really fast. I was convinced that the car was underpowered so went to triple H performance where I got 217bhp at the fly. I was pretty stunned as it only had an induction kit fitted!

I have some plans for modding the car. Time can only tell what is to come next. I'm hoping to get a diff clutch and flywheel next and I'm doing a lot of work in Norway at the moment so hopefully I will be able to get them in time for spring!

Anyway hope you enjoyed the build so far!
A

Good start with the car...Whereabouts in Glasgow are you?
Click to expand...

Cheers! Clydebank man, what about you?

TheLegMan said:
Cheers! Clydebank man, what about you?
Click to expand...

I must say the service was supreme and the fitment was perfect! Also a big thanks to fallenkshatriya for selling me the exhaust!

I'll update with some pictures tomorrow!

TheLegMan said:
Cheers man! It's everything I ever wanted in an exhaust! Your car looks amazing btw!
Click to expand...

My pleasure. Really glad you like it and thanks for your kind words.

Lavan is a proper gentleman and andy baird @ automek is quite simply the best mechanic/garage I have ever had the pleasure of dealing with, guys a legend and his service is outstanding.

Gonna take it to get dyno'd over the next few weeks to see if it has changed anything power wise. It feels like there is more torque and seems to be accelerating faster so it will be interesting.

Joined Dec 12, 2012
·
1,112 Posts
Got the car dyno'd today at tripleh. The car is down 7bhp with the Hks fitted.thisight be caused by the cat but the car probably needs a tune for the new exhaust. need to get some more parts now....


Sent from my iPhone using Tapatalk

Joined Dec 12, 2012
·
1,112 Posts
Well after long discussions, I have come to the conclusion that I'm a bit stupid. I dyno'd the car the second time with my snow tyres on the car and 17" alloys instead of my 18" alloy. Also Looking at the dyno print out, the atmospheric pressures are different which will give a different result.

The car feels slightly more powerful and is much smother to drive. It also only has a slight drone at 4000 rpm on the motorway but other than that it's quieter than the OEM exhaust.

Anyway LOVING the exhaust! I have ordered powerflex exhaust hangers to stop the rattling as the exhaust rattles when hot and idling.

I've also fitted my Mugen garnishes which look mint so I'll post a picture once I give my car a wash tomorrow.

Don't worry about the dyno , cars rarely make the same figure twice as it's down to lots of different factors.

from experience most parts benefit from a map tweak to get the best from them.

fallenkshatriya said:
These are the ones you want, Craig...Powerflex - Performance Polyurethane Bushes
Click to expand...

I ordered that one, but only ordered one cause im stoopid.